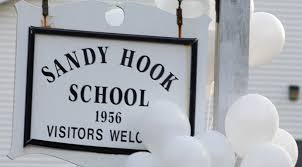 On the morning of December 14, 2012 in Sandy Hook, Connecticut, Adam Lanza killed his mother, shooting her to death with a .22 rifle, one of the many guns she owned. He then drove to Sandy Hook Elementary School where he shot his way through the glass doors. In the next five minutes he fired 156 shots, killing 20 small children, none older than 7, six school staff and, finally, himself. Police were on the scene almost immediately but by the time they entered the building, the shooting had stopped. Two teachers survived their wounds.

Lanza was a mentally ill young man, probably schizophrenic as well as suffering from other disorders including a serious case of anorexia that may have affected his cognition. There were neither drugs nor alcohol in his system, and his brain was free of physical abnormality. He had briefly attended the school years before but no other link to the killings was found. He was obsessed with mass murder, downloading videos about the killings in Columbine, Norway and the Amish school in Pennsylvania. Lanza seems to have spent years compiling a spreadsheet listing around 500 mass murderers and the weapons they used.

The Sandy Hook School was demolished and a new one built; his house was deemed unsaleable because of the notoriety and was acquired by the city. Calls for gun control intensified after the shooting and unsuccessful lawsuits were launched against the gun’s manufacturer and merchandiser.