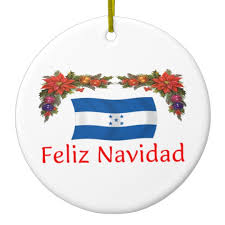 Christmas in Honduras begins with the appearance of the Warini, the Christmas Herald — a masked dancer who goes house-to-house accompanied by singers and drummers. His dance on January 6 will signal an end to the season. In fact dancing is an integral part of Christmas celebrations in this Central American country. The aboriginal Garifuna people perform costumed dances such as Pijamanadi, Dona Amidi, Coreopatea and John Canoe. In early December the women of certain tribal groups will dance in groups door-to-door; neighbourhoods will stage tambakus; and on Christmas morning children and their families will dance rondas and play games.

As in most Latin American countries the manger scene or nacimiento is central to home devotions at Christmas. The entire family will take part in putting together the scene which can be quite ornate and detailed. Other activities during Advent include participating in or watching the pastorelas, costumed shepherd dramas whose rehearsals start in October and enjoying office parties where workers may be matched in cochombros, a kind of Secret Santa present exchange.

A major part of getting ready for Christmas is the preparation of holiday food and drink. The Christmas Eve meal is often centered on turkey or roast piglet but there are many other traditional Honduran dishes such as meat pie filled with vegetables, raisins, fried plantain and peppers, nactamales, or sartén, green peppers stuffed with sour cream, cottage cheese, milk and corn dough, slow-cooked in an earthenware pot. The seasonal Honduran Christmas drink is eggnog, made from milk, eggs, sugar, cinnamon, cloves, and guaro liquor.

With much of the Honduran population living in the United States it is no surprise that American Christmas customs have penetrated the country. Presents are often exchanged on December 25 instead of on January 6 and Santa Claus has been edging out the Magi as gift-bringer. But most traditions linger. The nine days of the  posadas processions are still observed and Christmas mass is still a major attraction in this intensely Catholic land. Christmas trees have still not displaced the nacimiento and Three Kings Day will still see festive parades and the burning of Mr Old Year as the Christmas season comes to a close.

One thought on “Christmas in Honduras”