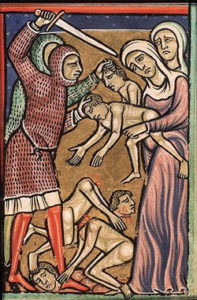 December 28, the Feast of the Holy Innocents, commemorates the murder of the male babies of Bethlehem by King Herod. In England the day was known as Childermas (or Dyzemas) and was considered an ill-omened time; few would want, for example, to be married on that date. Not only was no business conducted on that day, but the day of the week on which it fell was deemed unlucky for the rest of the year. In Ireland it was Lá Crostna na Bliana, the “cross day of the year” when no new enterprise was begun. Many sailors would not sail on that day; on the Aran isles no one was buried on Childermas (or the day of the week on which it occurred); and in Cornwall to wash on that day was to doom one of your relatives to death.

Childermas was also a day for ritual beatings. The seventeenth-century writer Gregorie notes the custom of whipping children in the morning of that day so that Herod’s murderousness “might stick the closer; and, in a moderate proportion, to act over the crueltie again in kind.”