In 1848 when the crowned heads of Europe were shaken by a continent-wide series of revolutions, the Tsar of Russia sent troops to help the Austrian emperor put down rebels in Vienna. When the Austrian foreign minister was asked if this would produce feelings of good will between his country and Russia, the prime minister, Prince Felix Schwarzenberg, replied, “Austria will astound the world with the magnitude of its ingratitude.”

Gratitude is a rare sentiments among nations. As Lord Russell, a 19th-century British politician said, “Britain has no permanent friends, only eternal interests. 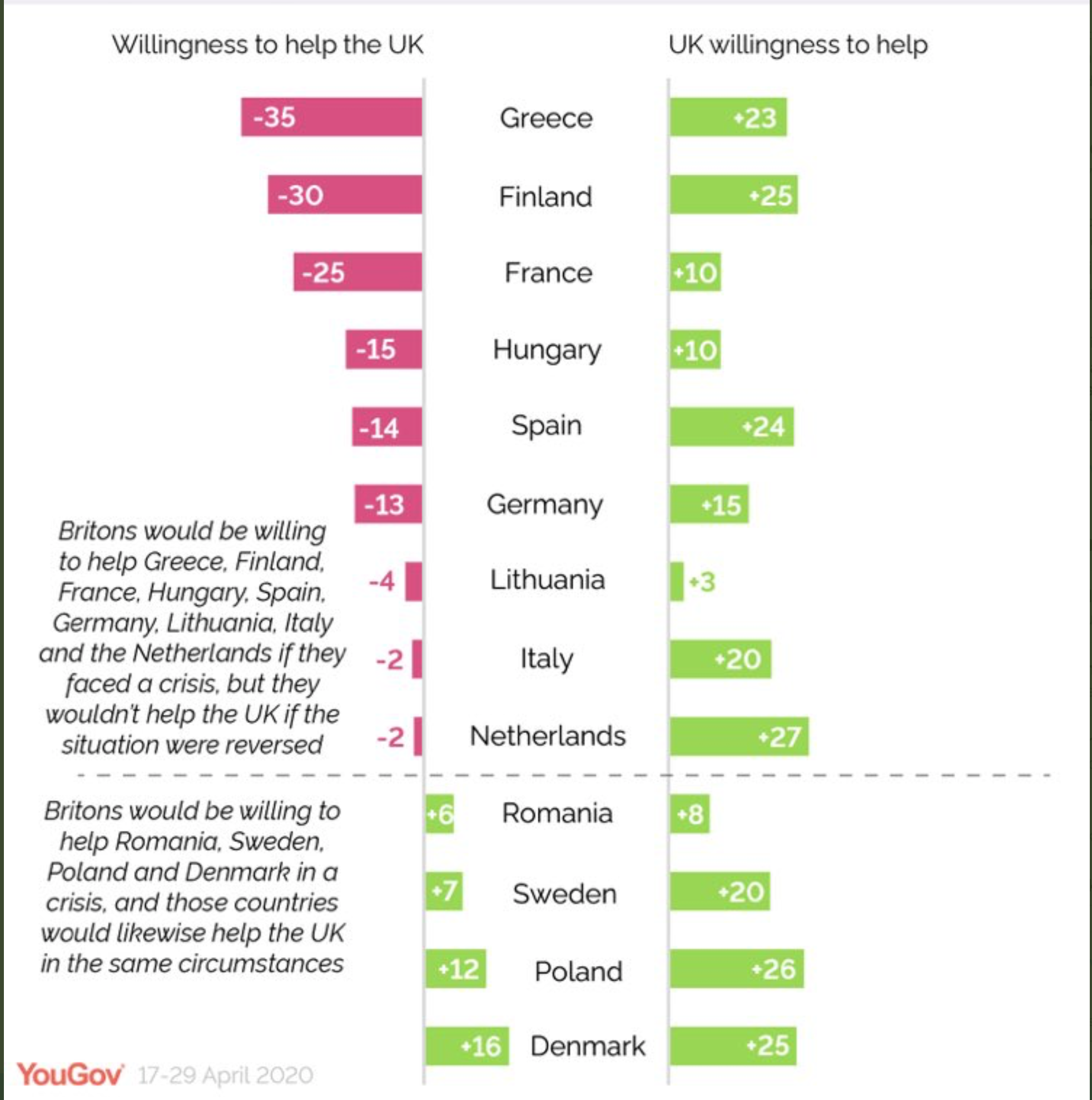 I was thinking of gratitude when examining this graph from 2020 which charted the results of a survey asking members of the British public which European countries they would be willing to aid in a financial crisis, and also asked Europeans if their country should help out a beleaguered Britain. It shows that the UK would assist any of its former EU partners but that most of Europe would turn their backs on Britain.

There are all kinds of conclusions one might draw. For example, the only four countries willing to help Britain have never been invaded by the British, but then again neither have hostile Finland, Hungary and Lithuania. Greeks might harbour resentment over British participation in their civil war in 1944-45, Spain might be sulking over Gibraltar, Germans might be remembering the firebombing of Dresden and Hamburg, and the French have never shown gratitude to anyone, anywhere, at any time.

The truth of that judgement about the French was borne out to me again this week on reading Canada Between Vichy and Free France, 1940-45 by Olivier Courteaux, the story of my country’s relations with the rival governments of France during the Second World War. Nationalists in Quebec were enamoured of Mussolini before the War and took a shine to the Pétainist Vichy regime after the collapse of France in 1940. Prime Minister Mackenzie King had to balance that (and Quebec’s opposition to Canadian participation in the war) with English Canada’s desire to fight the fascists and support the Free French. On several occasions King took the side of the notoriously prickly de Gaulle against British and American interests and at war’s end de Gaulle praised Canada for always being in his corner. The general famously showed his gratitude by trying to break up Canada and his 1967 Montreal speech in which he called for an in dependent Quebec.