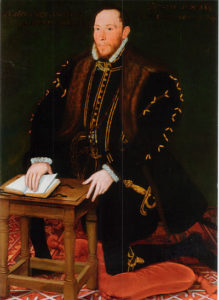 Death of a rebel Earl

For the first ten years of her reign Elizabeth I ordained a religious settlement that forbade any public worship other than the Anglican variety of Protestantism, but which tactfully looked the other way if Catholic families complied only minimally. The Queen was said to have announced that she did not wish to make windows into peoples’ hearts. Thus many Catholics worshipped as they wished in secret, paid a small fine for non-attendance at Anglican services, or made sure that at least one member of the family attended the state church.  That there were prominent noblemen and gentry who were secret Catholics was well known. Elizabeth imprisoned the Catholic bishops she inherited but did not burn the members of the dissident episcopacy as her sister Bloody Mary had.

This changed in 1569 with the first of two horribly ill-advised acts by Catholics. The first was the Rising of the Earls (or the Northern Rising), a rebellion by two prominent Catholic nobles in the north of the country: Thomas Percy, Earl of Northumberland and Charles Neville, Earl of Westmorland. For a time their army controlled Durham and celebrated the Mass openly but royal forces soon rallied and defeated the rebels, forcing the earls into Scottish exile. Then, far too late to aid the Rising, Pope Pius V issued the bull Regnans in Excelsis which declared Elizabeth a heretic, absolved English Catholics of their obedience to her and declared the throne vacant.

The results were catastrophic for English Catholicism. They inspired assassination attempts on the life of Elizabeth and hardened the Queen’s heart against Catholics; persecutions became the order of the day and many believers and priests were martyred. It would not be until the early 19th century before English Catholics were accorded their full civil rights. On this day in 1572, the Earl of Northumberland, having been sold by his Scottish hosts for £2,000 to Elizabeth, was beheaded for treason.