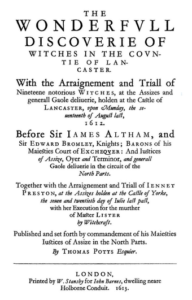 The trial of the Salmesbury Witches

The European Witch Craze took the life of about 40,000 women and men in the fifteenth to seventeenth centuries and it has been the subject of much study and debate ever since. Was it caused by the clash between Protestantism and Catholicism? Was it a war on women? Did it emerge more in mountainous regions or on the plains? Was there an economic basis for it? Did the views of witches vary among the social classes? Were witches really the practitioners of an ancient folk religion? The arguments continue.

One thing is certain and that is that the accusations of witchcraft were far more numerous in countries using a form of Roman law which allowed the torture of witnesses. In places such as England and Ireland, under common law, torture was generally forbidden and witch trials were far fewer. This changed somewhat, after the accession to the English throne of King James of Scotland. James was a believer in witchcraft and he even wrote a book on it, Daemonologie, where he stated: “The fearefull aboundinge at this time in this countrie, of these detestable slaves of the Devil, the Witches or enchanters, hath moved me (beloved reader) to dispatch in post, this following treatise of mine … to resolve the doubting … both that such assaults of Satan are most certainly practised, and that the instrument thereof merits most severely to be punished.”

In 1612, Grace Sowerbutts, a Lancashire girl, aged twelve, accused three women of the village of Salmesbury of being witches, and of practising infanticide and cannibalism. Jane Southworth, and Grace’s grandmother and mother, Jennet Bierley, and Ellen Bierley were said to be able to transform themselves into dogs and consort with demons. They had killed a local baby and disinterred the child and eaten it. Neighbours testified that one of the women had the reputation of being a witch. Things looked bad for the three accused until the judge re-examined Grace and her story fell apart. She confessed that she had lied and had been coached in her testimony by a Jesuit priest, hiding illegally in the area. The judge instructed the jury to find the defendants not guilty.

Others accused of witchcraft at the same time were less lucky and some of their trials resulted in them being hanged by the same judge who had released the Salmesbury Three.