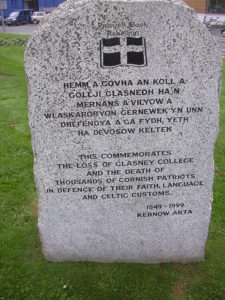 The End of the Prayer Book Rebellion

The English reformation of religion in the sixteenth century was a notoriously top-down affair and many government mandates were met with violent resistance. During the reign of Henry VIII, the dissolution of the monasteries prompted the massive Pilgrimage of Grace when the conservative north of the country rose in defence of the monks. Caught unawares the king was forced to conciliate the rebels with sweet promises until he had assembled enough of a military force to crush them. When Henry was succeeded by his Protestant son Edward VI attempts to enforce the new religious order was also met with outrage and violence.

The Prayer Book Rebellion (or the Western Rebellion) broke out in Cornwall and Devon in 1549. There the peasantry was already upset by the imposition of new taxes, painful price inflation, and the destruction of ancient religious sites by outside commissioners. The announcement that the old Latin rite that the countrymen had worshipped with for centuries was to be replaced by the English-language Prayer Book sparked riots and mass gatherings of armed men. Local landowners took leadership of the rebellion; the city of Exeter was besieged and gentry fled to their manor houses for safety as the two western counties saw thousands of angry Catholics under arms.

Judging by the list of demands drawn up by the rebels, the rising was a combination of religious grievances and social unrest. We can see the former in these three articles:

“First we will have the general counsel and holy decrees of our forefathers observed, kept and performed, and who so ever shall speak against them, we hold them as heretics.”

“Item we will have the Lawes of our Sovereign Lord Kyng Henry the VIII concerning the Six Articles, to be used as they were in his time.”

“Item we will have the mass in Latin, as was before, and celebrated by the priest without any man or woman communicating with them.”

But the dire economic situation of what historians have called the Iron Century also led the rebels to demand that lords restrict the number of their servants and to reform landholding practices.

Though successful at first, the rebels were ultimately defeated by royal armies containing large numbers of hardened foreign mercenaries. On this day in 1549 the decisive battle of Sampford Courtney was fought. Thousands of the men of Devon and Cornwall died in battle and thousands more were rounded up and killed out of hand by government troops. This would not be the last English rebellion over religious reform.