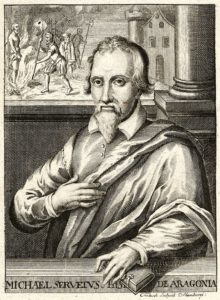 Arrest of a Spanish Heretic

Michael Servetus was born in Aragon about 1510 to a respectable family of the lower nobility. Well educated at the universities of Toulouse, Paris and Montpellier, Servetus demonstrated brilliance in a wide variety of fields: medicine, astronomy, law, geography and Biblical languages but it was his unorthodox views on the Godhead that brought him persecution and death.

In 1530 Servetus became a very junior part of the court of the Holy Roman Emperor Charles V (he who had faced Luther at Worms in 1521). In his travels with the emperor he encountered a number of Reformation thinkers and books and began to drift away from the Catholic faith. For the next decade Servetus became a renowned scientist and physician while also publishing works attacking the traditional notions of the Trinity. Despite a friendly correspondence with John Calvin in Geneva Servetus also condemned the notion of predestination, which helped lead to a break in his relations with Calvin who said: “Servetus has just sent me a long volume of his ravings. If I consent he will come here, but I will not give my word; for if he comes here, if my authority is worth anything, I will never permit him to depart alive.”

By 1553 Servetus had discovered the pulmonary circulation of the blood but the authorities were closing in on his heretical views. Forced to flee France, he headed for Italy with an ill-advised stop-over in Geneva. He was recognized in a church service on August 13, was denounced and arrested on charges of denying the Trinity and of attacking infant baptism. Calvin pressed hard for his execution, though since Servetus was neither a resident nor had he taught any doctrine in the city, banishment was the legal punishment. On October 27, 1553 he was burnt alive on a pile of his own books. Though most Protestant leaders supported the execution, it is an act that has blotted Calvin’s reputation to this day.