1457 Death of a notable humanist 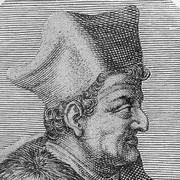 Lorenzo Valla was born in 1405. As a young man he showed signs of the two distinguishing features of his personality: intellectual brilliance and a talent for making enemies. By the age of 25 he was a professor of eloquence at the University of Pavia  where he wrote works praising the Epicurean philosophers for putting pleasure as the chief good in human life.  His attacks on judges and judicial thinking got him run out of Pavia and after a bit of wandering (common to humanists) he settled at the court of Alfonso of Aragon, King of Naples in 1433. His free-thinking ways got him into trouble there too. He denied that the Apostles’ Creed was written, line-by-line by the apostles, criticized the orthodoxy of St Augustine and mocked monasticism. Not surprisingly, he was hauled up on charges of heresy – only the intervention of Alfonso saved him.

In Naples he also wrote “De elegantia linguae latinae”, which first placed the study of Latin on a scientific basis. The Humanists who preceded him had formed their Latin style rather empirically, and consequently had admitted many constructions peculiar to popular Latin – errors which Valla pointed out. Though Valla had refrained from personalities, all the literary writers considered his work a provocation, and hurled invectives against the author. This controversy is one of the most unpleasant pages in the history of the Italian Renaissance. The fiercest aggressor was Poggio Bracciolini, who did not confine himself to pointing out errors of style in Valla’s works, but accused him of the most degrading vices. Valla’s no less acidic answers are collected in his “Invectivarum libri sex”. Poggio’s invectives created a bad impression at Rome; as Valla still hoped to obtain a position in the Curia, he wrote an “Apologia ad Eugenio IV”, excusing himself for his faults and promising amendment. 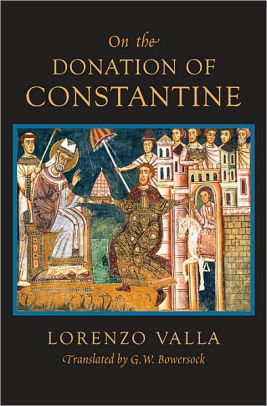 Alfonso’s quarrels with the papacy of Eugenius IV provided a safe atmosphere in which to write the piece for which he is best known today — the “Declamazione contro la donazione di Costantino”. In it he demonstrated by humanist scholarship that the famous “Donation of Constantine” which purported to be a 4th-century grant of western Europe to the papacy by the emperor Constantine the Great was a forgery. Though it attacked an invaluable papal political tool, Valla’s work found favour with a new pope (who was himself a humanist) and he was employed until his death by the papacy. Astonishingly, Valla is buried inside papal territory in the church of St John in Lateran, the Cathedral for Rome, sometimes called the mother of all churches – founded by Constantine during the time of Pope Sylvester.