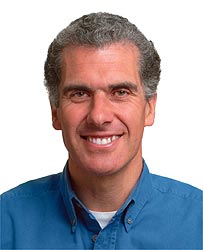 The birth of Nicky Gumbel

Nicholas Glyn Paul Gumbel was born the son of a prosperous London family; his father, a refugee from Nazi Germany, was a secular Jewish lawyer and his politician mother was not a church-goer. He received the most elite of English educations at Eton and Trinity College, Cambridge (the same pedigree as the former British Prime Minister, David Cameron, and Justin Welby, the Archbishop of Canterbury.) At Trinity, Gumbel was converted from a grumpy atheism to Christianity. He trained as a barrister and practised law but left the legal profession in 1982 to study theology and become an Anglican priest.

After he was posted to the London parish of Holy Trinity, Brompton, he became associated with the Alpha Course, an introductory series of lessons in Christianity. Alpha had been started in 1977 by Reverend Charles Marnham but it became a global phenomenon when Gumbel assumed its leadership in 1990. It claims to have reached 20,000,000 people in 169 countries. Despite this success, Alpha has fierce critics inside Christianity who mistrust its ecumenicism and interest in glossolalia while those outside the church often refer to it as a cult.

Gumbel is the author of  Questions of Life which has sold over 1,000,000 copies. Voted “Christian Book of the Year” in 1994, it has been published in 48 languages. Other books include Why Jesus, Searching Issues, Telling Others, A Life Worth Living, Challenging Lifestyle, Heart of Revival and 30 Days.