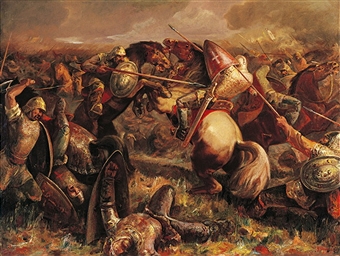 Bulgars defeat the forces of the Latin Empire

Devoted readers of this blog will remember that on April 12 we recounted the story of the fall of Constantinople in 1204 to the forces of the Fourth Crusade who overthrew the Orthodox Byzantine rulers, sacked the city and established a Catholic empire. The first emperor of this new state was Baldwin of Flanders, a western knight who faced resistance from both his fellow crusaders and rebellious Greeks. In 1205 his army was defeated by an army of Bulgars and their pagan allies from the Eurasian steppes, the Cumans. Baldwin was captured and disappears from history except for a legend that he was murdered by his captors and his skull turned into a drinking goblet, the same fate to which the Bulgars had subjected the emperor Nicephorus in 811.

In Western Europe Baldwin became one of those kings whose shadowy fate inspired impostors, like the False Dmitri (I and II) in Russia and the Princes in the Tower who bedevilled the reign of Henry VII in England. A minstrel named Bertrand appeared twenty years later and claimed to be Baldwin, explaining his absence by a story of having become a hermit. Though Bertrand was exposed as a fake, a number of other impostors appeared for the next few decades and inspired discontented peasants to follow them.

The Catholic or Latin Empire never really took hold in the ruins of the Byzantine state and in 1261 Michael Paleologus would succeed in driving the westerners out of Constantinople and establishing the last Orthodox dynasty in the empire.