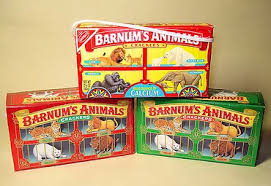 Animal crackers were in the news recently when PETA (People for the Eating of Tasty Animals) took credit for convincing the manufacturers to change the cover illustration to one that did not depict the critters behind bars as in a circus or zoo. Readers may have been unaware of the connection between the treat and Christmas.

The National Biscuit Company in 1902 introduced “Barnum’s Animal Crackers” as a seasonal promotion. The box’s carrying string was designed for hanging on a Christmas tree at a time when candy and treats were still a typical decoration. Shirley Temple later celebrated the snack with the song “Animal Crackers in My Soup”.