“Avoid anything that pretends to be what it’s not”. From low fat ‘buttery’ spreads to decorative ‘pocket flaps’ on clothes to ‘bacon-flavour’ sprinkles, they are all at best disappointing, at worse downright deceitful.

Abraham Lincoln said: “If I had eight hours to chop down a tree, I’d spend six sharpening my axe”. No wonder he’s the only US President with a statue in Parliament Square. It took me years to understand the value of this but I genuinely try to abide by it.

“Always walk towards the sound of gunfire.” The late Barbara Castle told me this when I introduced her at a literary dinner along with Jeffrey Archer. I’m pleased to say that as an orator, she wiped the floor with Archer and this exhortation, which means if you think there’s something wrong, there almost always is, is one I turn to pretty much every day. 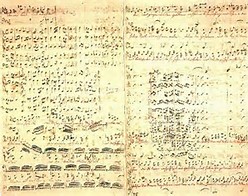 Johann Sebastian Bach (1685-1750) is now recognized as the towering genius of classical music but there was a time after his death when he had largely faded from public memory. His work was respected by later composers but JS Bach’s major works were seldom performed. Such was the case of his monumental musical treatment of the suffering and death of Jesus according to the Gospel of Matthew. Written for two choirs and two orchestras it was meant to be performed on Good Friday.

Felix Mendelssohn had been given a copy of The St Matthew Passion which Bach had written in 1727 and which had not been performed outside of Leipzig since 1750. Mendelssohn’s staging of the oratorio in 1829 attracted a great crowd and contributed much to the revival of interest in Bach’s music.

If you don’t know what to do, do nothing.

“When you lose, don’t lose the lesson.”

Make sure you have four good friends: one more handsome, one uglier, one richer and one poorer than yourself. That way you experience perfect contentment and humility.

All the best advice I received was from my father, and I even took some of it. My favourite is: “The man who never made a mistake never made anything.”