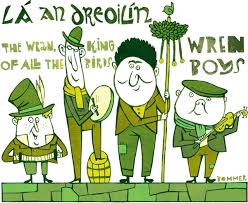 Ever since the tenth century Stephen’s Day has been associated with horses, probably because the season was a time of horse sacrifice in pagan northern Europe and a time of rest from agricultural work for both man and beast. In England it is a time to bleed horses to ensure their health for the coming year. Across Europe December 26 is a time for horses to be fed extra food, raced, decorated, blessed by the priest or ridden in ceremonies honouring their species. This is particulalry true in Sweden where “Staffan Riders” would race from village to village and sing songs in honour of the saint. Some have tried (not very successfully) to explain the connection between horses and St Stephen’s Day by claiming it has stemmed from confusion between the martyr in the Book of Acts and a later saint, Stephen of Corvey, martyred c. 1075, whose feast day June 2. This Stephen was a lover of horses and was said to ride five of them in turn. When he was murdered his unbroken colt took him home to Norrtalje which became a shrine for horse-healing.

St Stephen’s Day is also marked in Ireland and other parts of Britain by hunting a bird considered protected every other the day of the year, the wren, and parading about with its body. Wren Boys used to carry a dead wren on a branch from house to house, and sing an appropriate song which solicited money:

Change your opinions, keep to your principles; change your leaves, keep intact your roots.

Oh, how I want this hipster nativity scene: the selfies, the Starbucks cup, the Amazon delivery men on Segways, the organic cow, the sheep in the sweater, and the manger with solar panels. 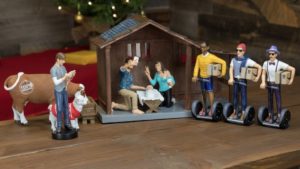 What would Christmas be without leprechauns as Wise Men, bringing gifts of gold, shamrocks, and Guinness? 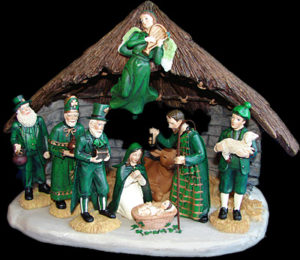 Herod (73-04 B.C.) was  king of Judaea at the time of the birth of Christ and rebuilder of the Temple in Jerusalem. His murderousness was legendary: he killed many of his children and wives — the Romans joked that it was safer to be Herod’s pig than a family member.  The Massacre of the Innocents which the Bible ascribes to him is very much in keeping with what we know of personality. He is the subject of a number of Christmas carols and ballads, such as the Coventry Carol, The Carnel and the Crane, and St. Stephen and Herod, and appears in seasonal drama as a raging tyrant. In Christmas art, he was portrayed as a rather big, old man, crowned and sitting on a throne.  He is always bearded with long dark hair and wearing royal garments.

The twelfth-century abbey of Fleury in France staged a dramatic presentation that has come to be known as The Play of Herod. It describes the Nativity with its attendant angels, midwives and shepherds, the encounter between King Herod and the Magi and the Massacre of the Innocents which the king orders. Of the surviving medieval plays with these themes the Fleury Herod is considered to be the most artistically satisfying.

“Step by step they were led to things which dispose to vice, the lounge, the bath, the elegant banquet. All this in their ignorance they called civilisation, when it was but a part of their servitude.”

“Freddie experienced the sort of abysmal soul-sadness which afflicts one of Tolstoy’s Russian peasants when, after putting in a heavy day’s work strangling his father, beating his wife, and dropping the baby into the city’s reservoir, he turns to the cupboards, only to find the vodka bottle empty.”

A general Dissolution of Principles & Manners will more surely overthrow the Liberties of America than the whole Force of the Common Enemy. While the People are virtuous they cannot be subdued; but when once they lose their Virtue they will be ready to surrender their Liberties to the first external or internal Invader. How necessary then is it for those who are determin’d to transmit the Blessings of Liberty as a fair Inheritance to Posterity, to associate on publick Principles in Support of publick Virtue. 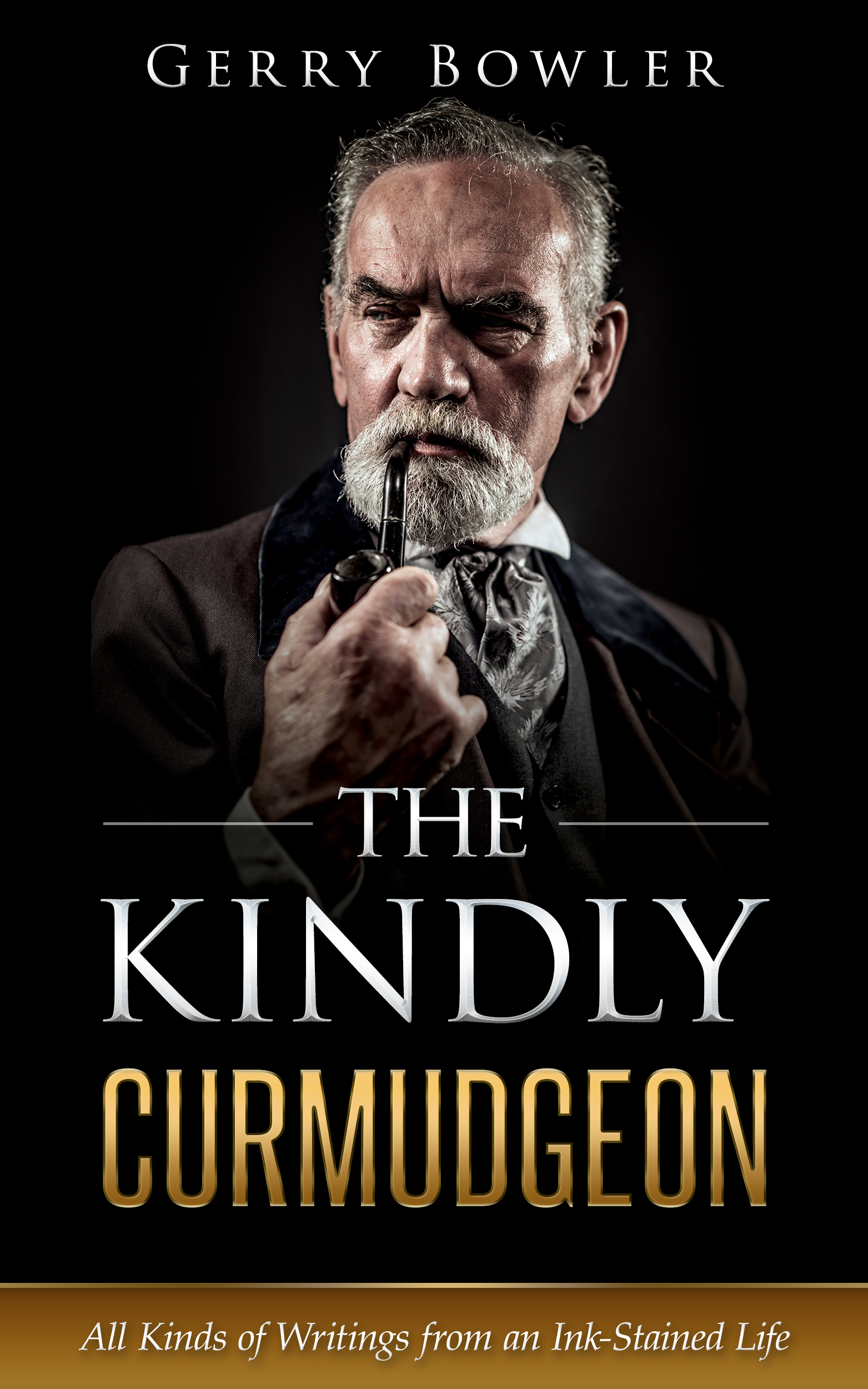 Smoking hot off the digital Theodosian presses comes “The Kindly Curmudgeon: All Kinds of Writings from an Ink-Stained Life”, a collection of Gerry Bowler’s Shortest and Greatest Hits. Grab your copy at https://www.amazon.ca/Kindly-Curmudgeon-Kinds-Writings-Ink-Stained-ebook/dp/B01KIC81DW/ref=sr_1_2?ie=UTF8&qid=1475294046&sr=8-2&keywords=the+kindle+curmudgeon 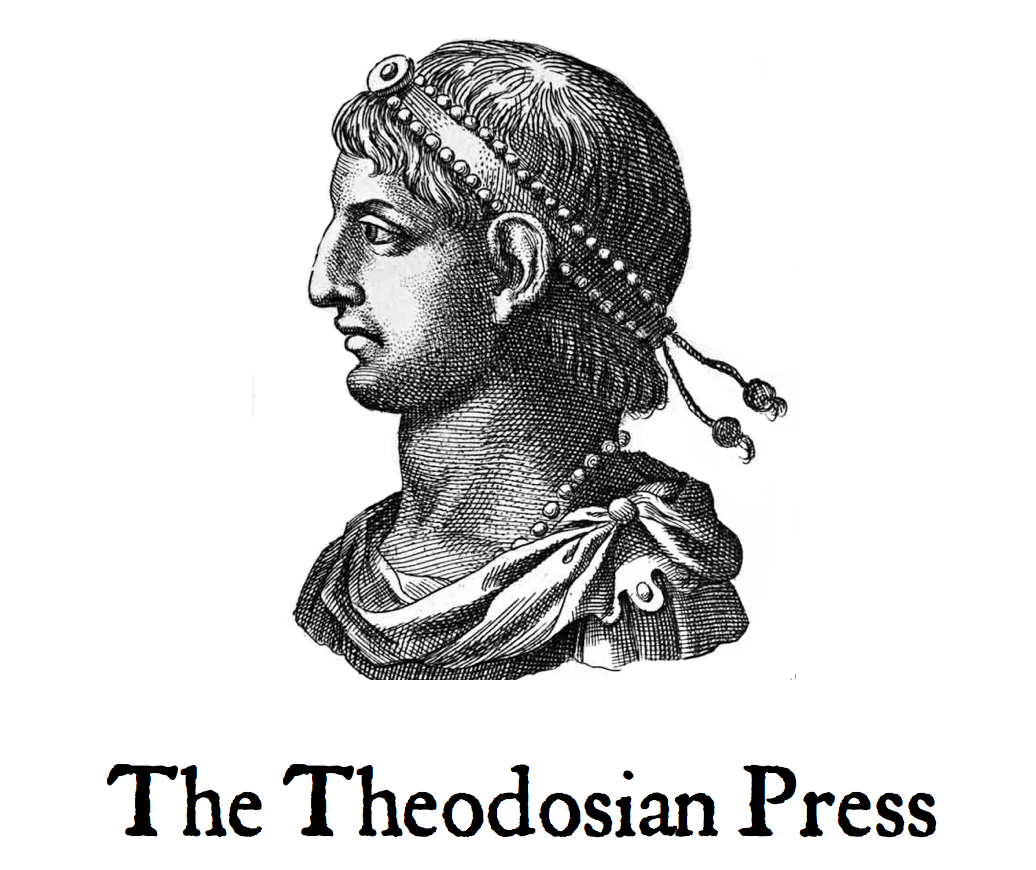 The Theodosian Press is an e-publishing venture that will bring to the reading public new works of history, theology, and literature, as well as reintroducing forgotten classics. We aim to combine scholarly integrity with popular readability and to make our imprint synonymous with entertaining and educational digital books.

The press is named after two emperors of Late Antiquity: Theodosius I defeated the Arian heresy, ended the bloodthirsty gladiatorial games, and rescued enslaved children; Theodosius II invented the university and built the mighty land walls that protected Constantinople for a thousand years.